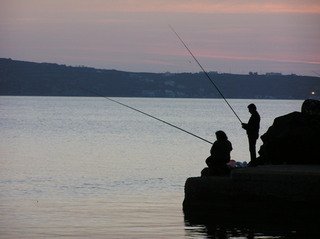 “Simon answered, ‘Master, we’ve worked hard all night and haven’t caught anything. But because you say so, I will let down the nets.’ When they had done so, they caught such a large number of fish that their nets began to break. So they signaled their partners in the other boat to come and help them, and they came and filled both boats so full that they began to sink. When Simon Peter saw this, he fell at Jesus’ knees and said, ‘Go away from me, Lord; I am a sinful man!’ For he and all his companions were astonished at the catch of fish they had taken, and so were James and John, the sons of Zebedee, Simon’s partners. Then Jesus said to Simon, ‘Don’t be afraid; from now on you will catch men.’” (Luke 5:5-10 NIV84)

There are a few things I would like to point out in this wonderfully simple story of fishing. For humor’s sake let me get this one out there: when you tell fishing stories with Jesus there is no exaggerating; the miraculous catches are the real thing.

But seriously, I want to note first that Peter was obedient to Jesus’ request to go back out on the water to go fishing even though they had fished all night and not caught anything, and every good fisherman knows you don’t catch fish in the middle of the day. Even though everything within Peter’s being was telling Him this didn’t make sense, he still did what the Master asked. Boy is that a lesson for me (and maybe you). I tend to do what God asks me to as long as it makes sense to me. So, ultimately, I put myself in a position to decide. Peter and the others went! And so should we!

To their amazement the catch of fish was beyond comprehension. They knew that some other force must have made the impossible possible. They knew that Jesus was the one difference in this fishing adventure. Jesus had not been with them in the evening (when they caught nothing), but He was with them when they went out in the middle of the day and caught more than they could handle. It is important that we recognize when God acts in our lives. When unnatural things happen in our very natural world, we need to give God the glory and the praise.

Note Peter’s response. “Go away from me, Lord; I am a sinful man.” Peter not only recognized the amazing catch of fish, he understood that Jesus is the Lord of the universe who caused it to happen. To that reality, Peter immediately reflected upon his own inadequacies. He immediately contrasted his sinfulness with Jesus’ holiness. Confession and repentance need to be a constant part of our lives as we seek to grow in a closer and deeper relationship with Jesus. Jesus responded to Peter, “Don’t be afraid!” There was nothing to worry about because Jesus had come to redeem and save him from the consequences of his sins.

Finally, Jesus commissioned Peter and the rest of the disciples to throw in their fishing nets because now Jesus was going to send them into the world to fish for men. This is the role of the church today. We are here to continually fish the dark waters of this world to bring people to Jesus. We don’t have to worry about proper technique. If Jesus can catch fish in the middle of the day, then He can catch the hearts of men and women at any time. But it is important to understand that He needs the fishermen. The great catch of fish would not have happened if the disciples had not been obedient to Jesus’ request to go out fishing. We need to be obedient to His request to go out and fish for men. He will take care of the hard work.