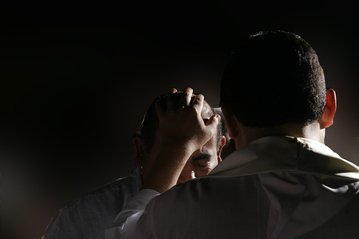 “While He was in one of the cities, behold, there was a man covered with leprosy; and when he saw Jesus, he fell on his face and implored Him, saying, ‘Lord, if You are willing, You can make me clean.’ And He stretched out His hand and touched him, saying, ‘I am willing; be cleansed.’ And immediately the leprosy left him.” (Luke 5:12–13, NASB95)

Nobody touches a man full of leprosy, nobody! Leprosy is one of the most contagious diseases on the planet. If you had it, you were considered the walking dead. One day, Jesus was walking through a town and a man “covered with leprosy … fell on his face and implored Him [Jesus], ‘Lord, if you are willing, You can make me clean.'” There are some amazing things to notice in the leper’s reaction to Jesus. He fell on his face before Jesus in total humility. One might think that he had every right to curse God for his condition, but that is not what we see. We see a humble child of God reverently turning to his God and, amazingly, seeking God’s will. The leper began with, “Lord, if you are willing.” I don’t know about you, but I would be screaming out what I wanted! “Heal me!” would be my words. I am humbled and amazed that this dying leper was still seeking the Lord’s will to be done. Finally, with a simple but solid faith, he turned to Jesus and said to him, “You can make me clean.” Even in his advanced state of illness he believed that Jesus had the power to make him well. The leper was simply seeking the will of his Creator. What a beautiful picture of what prayer should be like!

So we know that this event ends with the leper being healed by Jesus. But that is not all. Jesus touched him. He didn’t have to touch him. He could have just used words. He could have told him to go wash in a river somewhere. But no! Jesus stretched out His hand and touched the leper. What an act of divine grace. That poor man hadn’t had human contact in years. It was against the law for him to get within a certain distance of a healthy human being. Jesus defied all those laws and regulations and touched the leper. And rather than Jesus contracting leprosy by touching him, just the opposite took place. Through this touch of grace Jesus completely healed the man of his leprosy. We do not have a God who is far away. We don’t have a God who only deals with us from a distance. We have a God and Savior who became a man so that He might relate to our pains and sufferings. He touches and He heals.

May you experience the touch of divine grace as you walk with God today.