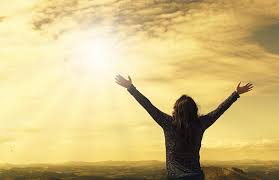 “They found the stone rolled away from the tomb, but when they entered, they did not find the body of the Lord Jesus. While they were wondering about this, suddenly two men in clothes that gleamed like lightning stood beside them. In their fright the women bowed down with their faces to the ground, but the men said to them, ‘Why do you look for the living among the dead?’” (Luke 24:2–5, NIV84)

I am struck by the fact that Jesus is the only religious leader ever to begin and end his life with life. Every other religious leader and philosopher died. Their bodies are entombed within the earth. Life ended for all of them. All of them except Jesus! His life continues on. He laid it down and then picked it up again. There is no need for a stone to cover the opening of a tomb that has no body in it. Jesus was right! He said at the tomb of Lazarus that He was the “resurrection and the life.” He proved it on that day when He asked for the stone to be rolled away from Lazarus’ tomb. He proved it on Easter morning when He rose as the conqueror of death itself. It is in the resurrection that every Christian puts all hope. We know that if death could be defeated, then anything is possible.

But what about the angels’ question? In our society today, I find this question rather ominous. I think everyone within themselves has some very core questions about origin, purpose, morality and destiny. The key to these deep questions is not the questions, but where the seeker goes to find the answer. The women on Easter morning were looking for the right person (Jesus), but they went to the wrong place to find Him. It is crucial that we go to the right place for the answer to life’s key questions. But now the question is, “Where should we turn?” There are so many voices out there telling us they have the answers. Which one should we listen to? My suggestion: Let’s listen to the only religious leader who ever claimed to be the Way, the Truth and the Life, and proved it by rising from the dead.